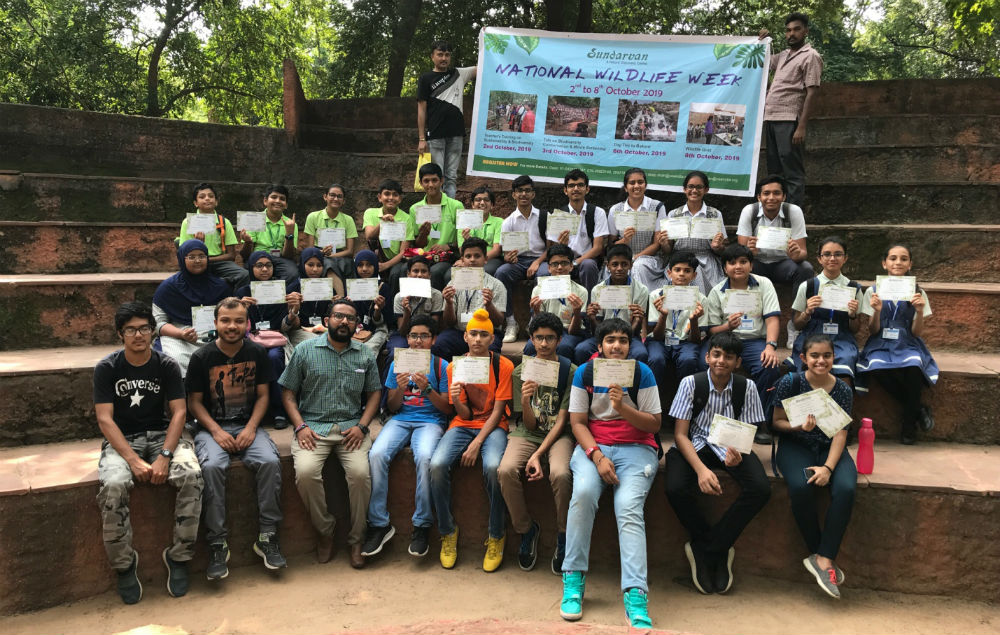 (An activity centre of Centre for Environment Education, Ahmedabad)

Wildlife Week is celebrated all over the country during the month of October from 2nd to 8th October every year with the view to conserve the wildlife of the India. It was first started in the year 1952 with the great vision of saving the life of the Indian animals through education & awareness and encouraging concerned authorities to take corrective actions. It involves the planning to save animal from extinction in India. The Government of India had established an Indian Board of Wild Life which had worked to enhance the awareness as well as the consciousness of the Indian people towards the wildlife conservation. This task has been now taken by Ministry of Environment, Forest and Climate Change.

Sundarvan, Nature Discovery Centre is a unique facility of Centre for Environment Education (CEE), Ahmedabad, created for experiencing and understanding nature. This is located in the heart of the city of Ahmedabad and an ideal place to visit for children as well as adults. It was inaugurated in 1978 by legendry ornithologist Dr. Salim Ali with the aim of bringing awareness among the people for nature and wildlife conservation. Sundarvan is recognized as a Mini Zoo by the Central Zoo Authority (CZA) and housing birds, mammals and reptiles. The Centre also has an aquarium and a butterfly park amidst the thick vegetation of many species of trees. Sundarvan’s activities with children act as a catalyst and stimulate the process of inquiry into nature. Though school children are our major target group, Sundarvan conducts different activities on spreading education and awareness to reach out different age groups.

Due to human population explosion, expansion in agriculture land, Industrialization, loss in forest cover, and climate change; nature and wildlife are facing severe threats for its survival. Many of the wild species have been extinct and many more are on the verge of extinction. Industrial and Agricultural development in the Country should go hand in hand with sustainable management practices and conservation of natural resources including wildlife. Therefore, to arouse a general awakening in common people in favour of preservation and conservation of wildlife, our country observe Wildlife Week from October 2 - 8 every year and encourage different activities aiming to bring awareness on wildlife conservation.

The Wildlife week is celebrated every year in the country during the 1st week of October which coincides with the birth anniversary of Mahatma Gandhi. Further the Honorable Prime Minister of India has launched the Swachh Bharat Mission on 2nd October, 2014. In this regard, Ministry of Environment, Forest and Climate Change, Govt. of India has taken various steps for cleanliness and sanitation drive throughout the country and recently launched a campaign named as “Swachhata Hi Seva” under Swachh Bharat Mission. Sundarvan observed Wildlife Week 2019 along with the “Swachh Bharat Mission” campaign and people were told about the importance of cleanliness and hygiene during its activities not only at Sundarvan but other places of Gujarat as well.

PROGRAM ORGANIZED DURING THE WILDLIFE WEEK AT SUNDARVAN :


As a part of National Wildlife Week Celebration, around 320 students from different schools of 7 Districts of Gujarat State i.e. Bhavnagar city, Surat (Mandvi), Bharuch (Jammusar), Morbi (Halvad), Ahmedabad (Sanand), Kutch (Mandvi), and Surendranagar (Sayla) along with 70 teachers visited Sundarvan on 1st October, 2019. This visit was to mainly gain basic knowledge on Reptiles in particular and common wildlife in general. The students were briefed about the educational role of Sundarvan Nature Discovery Centre.

The topics such as general information of reptiles, snake diversity, venomous and non-venomous snakes, precaution to avoid snakebite, treatment, myths and facts and conservation importance were covered during the session of snake awareness programme followed by Nature Trail walk. The message regarding importance of cleanliness and reducing pollution by practicing use of biodegradables, green energy and discontinuation of single use of 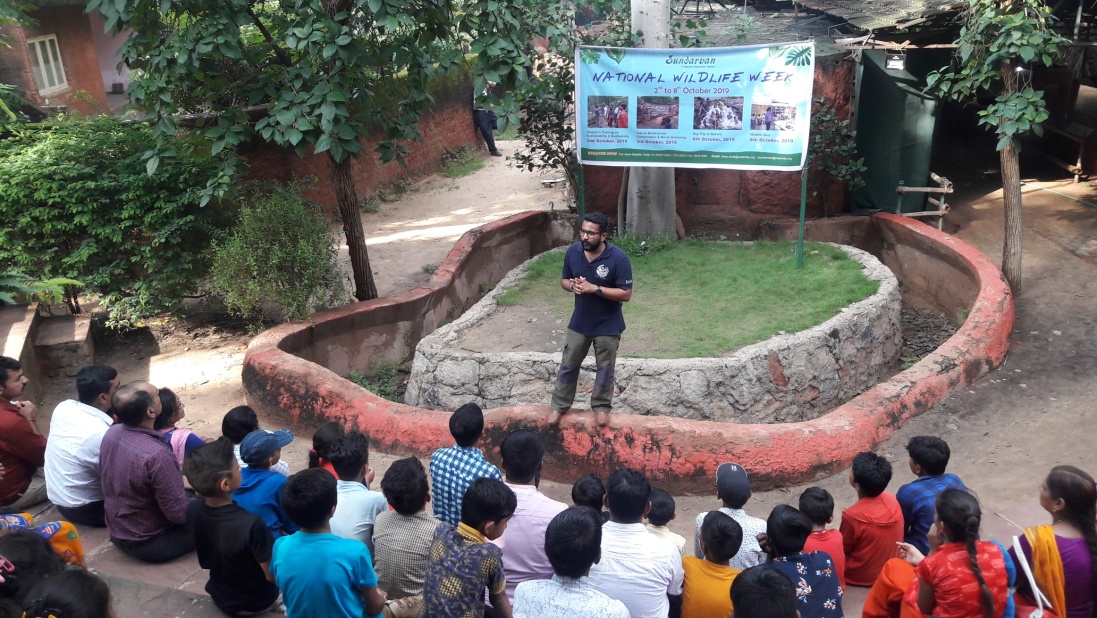 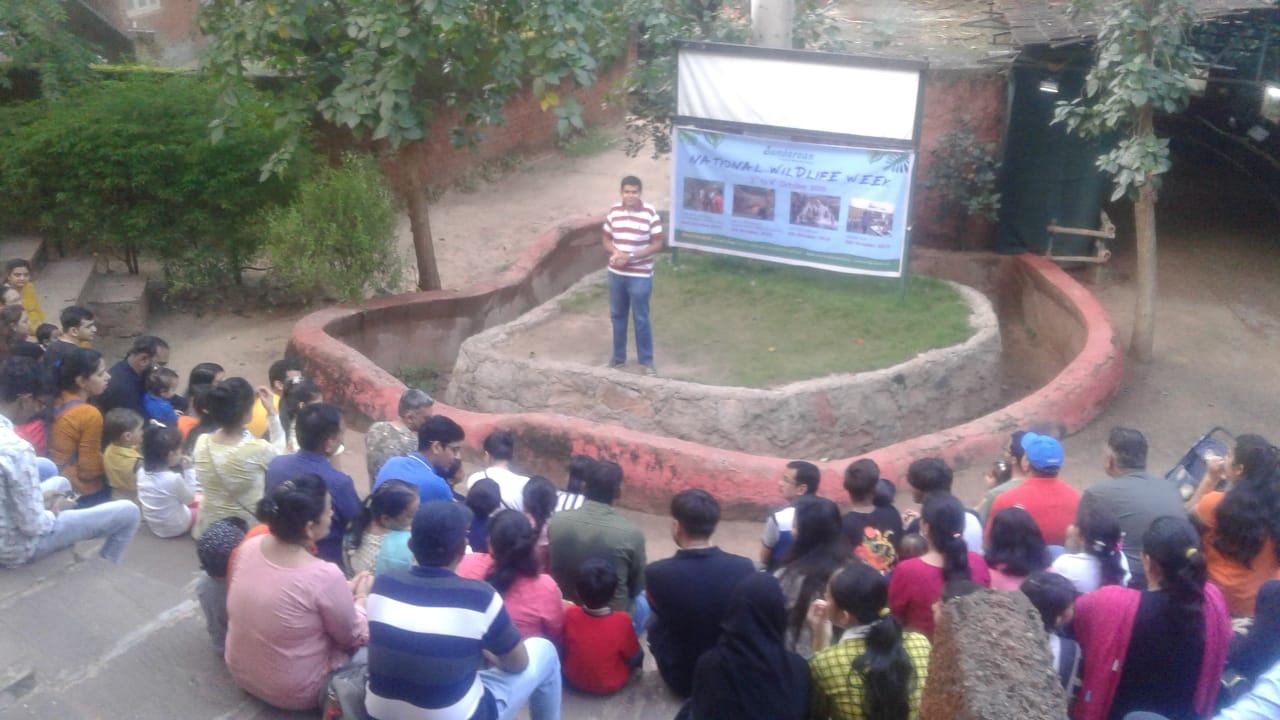 Snake Awareness Program for common visitors was conducted on 6th and 7th October, 2019 as a part of National Wildlife week celebration. The topics such as general information of reptiles with special reference to snakes, snake diversity, venomous and non-venomous snakes, precaution to avoid snakebite, treatment, myths and facts and conservation importance were covered during the session of snake awareness programme followed by

Nature Trail walk. The message regarding importance of cleanliness and reducing pollution by practicing use of biodegradables, green energy and discontinuation of single use of plastics, bio-fuels was delivered to the audience.

Field trips are important to help bridge the gap between education and hands-on experiences. Field trips provide entertainment to students and youth. They often serve as a powerful motivator for all, stirring up excitement as the trip nears. Break from the routine life provides a fresh breeze that might make them more focused back in the routine work. Learning and fun make a great combination. Focusing on these perspectives, Sundarvan therefore planned a field trip to Bakore, a campsite of CEE which lies into Panchmahal Forest Range and Mahisagar District. 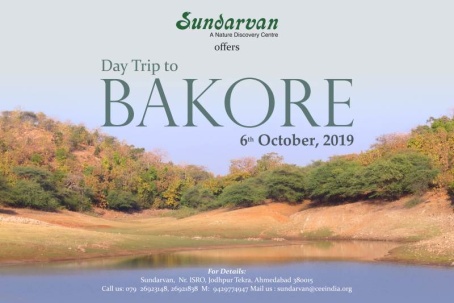 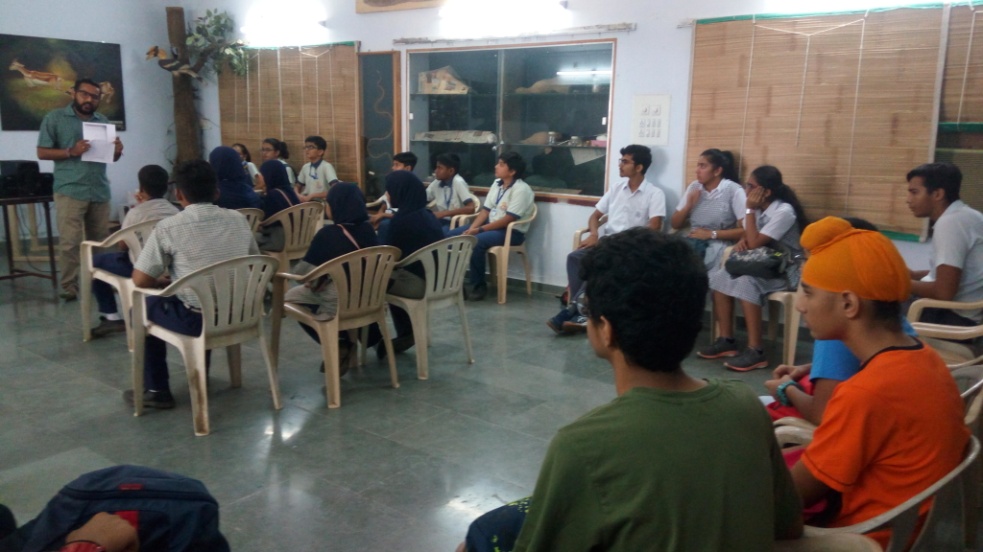 pollution) and Indian Biodiversity through audio and visuals questionnaire. This quiz was also aimed to spread awareness on wildlife Conservation and Nature Education. Seven teams were qualified after first round. Second round consisted of normal & rapid fire questions and visuals. Final round consisted Pictorial and buzzer round for visuals of wildlife species of India. Mahatma Gandhi International school secured first position followed by Rachana School and St. Kabir. The event concluded with prize distribution, group photo and refreshment. 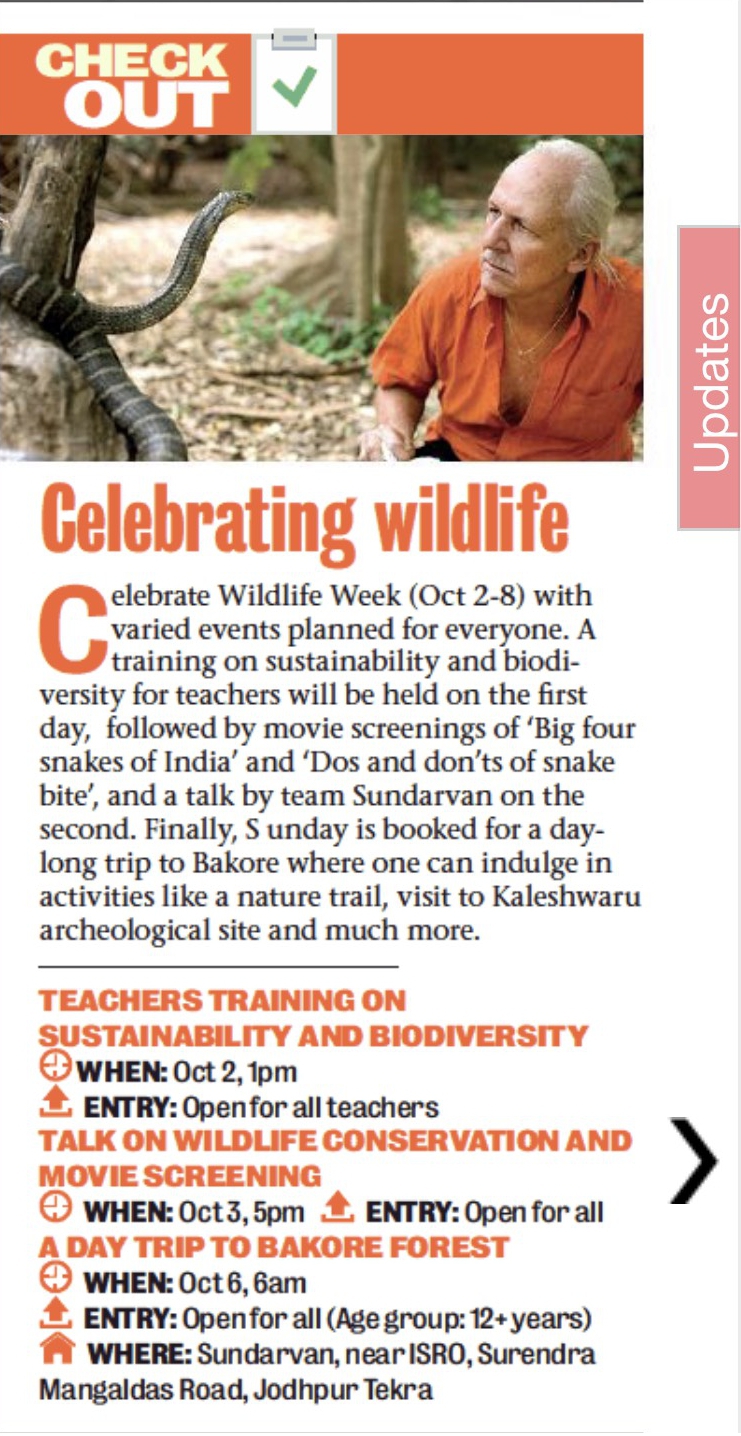 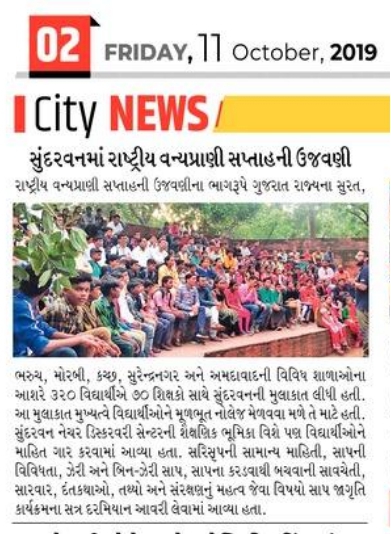 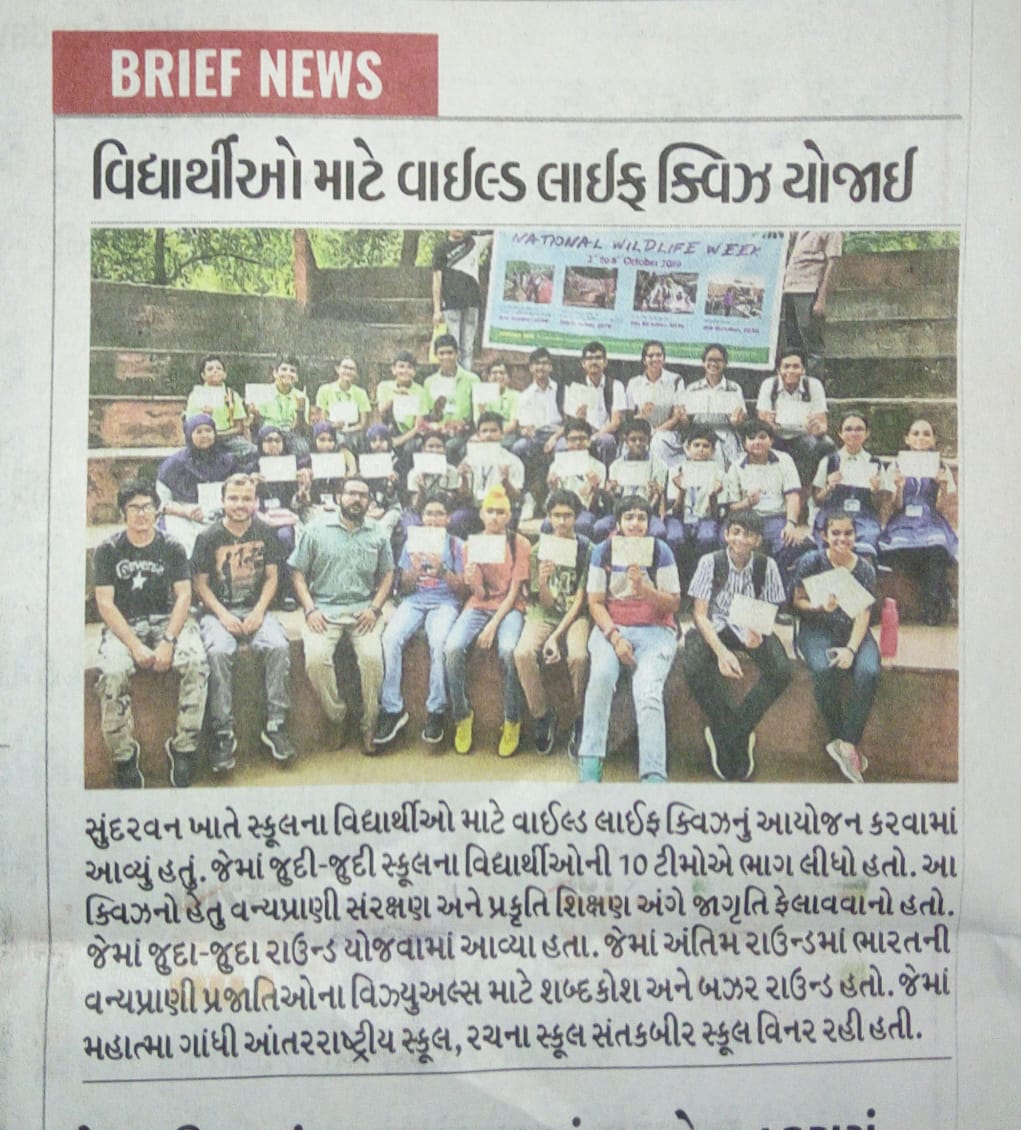 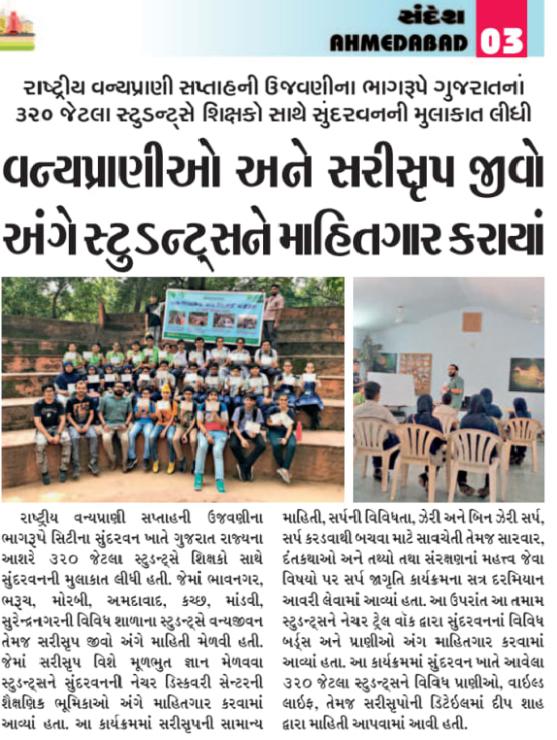 Sundarvan, Ahmedabad has celebrated World Environment Day (WED) on 5th June to sensitize citizens about current Environmental issues as well as the theme “Beat Air Pollution”. Around 150 participants have joined the celebration. Sundarvan has conducted Snake Awareness Program in which Introduction on snakes, diversity in India, venomous & non-venomous, caution to avoid snake bite, snakebite and treatment, importance of snakes, threats and conservation measures and myths and facts were delivered to the audience. After that Nature Trail walk was conducted in which interesting facts and figures as well as myths associated with the enclosure animals were delivered and got cleared out. Bat awareness program was also conducted in which Facts and figures on Bats were delivered and also myths associated with bats got cleared out. The session was followed by a Wildlife Documentary screening to sensitize the citizens about wildlife.